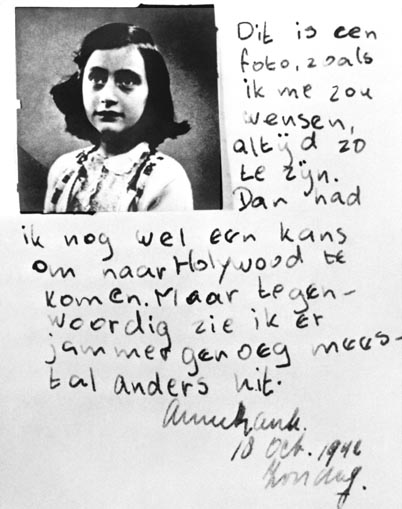 The Anne Frank-Fonds in Switzerland is the manager of the copyrights on the Diary of Anne Frank. This Fund has tried several times to register trademarks like Le Journal d’Anne Frank in the Benelux, without any success. The background idea of these attempts is probably the approaching year of 2015, the year in which the copyrights on the diary expire. Markmatters.com assumes that the Foundation wants to try to exercise some control by the means of a trademark.

The Fund recently tried again to obtain exclusive rights and filed DE DAGBOEK OF ANNE FRANK (the diary of Anne Frank) in the Benelux. This resulted in a refusal on absolute grounds as this trademark exactly describes the content of the claimed products such as DVD’s, printed matter and theater plays. The refusal is not the only thing the Fund has to cope with. The Anne Frank Foundation does not want to share the trademark Anne Frank and filed an opposition against this trademark!