Fashion designer Stella McCartney is claiming that Steve Madden is copying her famous designer bags, and calls them a “poorly made knock-off”.

Stella McCartney’s Falabella bag is one of the brand’s best-selling items. It features a very distinctive silver hardware chain trim. Its success, since it launched in 2009, has spawned an entire range of bags trimmed in the same manner, from quilted rucksacks to small clutch bags. The Fold Over Falabella retails from EUR 800.

And then there is Steve Madden, the popular shoes and accessories retail chain located across the US. The fashion house produces a strikingly similar BTotally bag, on sale for EUR 110,-, a “poorly-made… knock-off of the famous Falabella Foldover Tote bag”, according to McCartney.

Time for a law suit. McCartney claims that that “Long after [her] Falabella collection of bags, with their distinctive trade dress, achieved prominence in the fashion industry, and after [McCartney] obtained design patent protection for its design, Steve Madden began importing and selling a tote bag, that, although virtually identical in appearance, is a poorly-made copy.”

McCartney’s IP lawyers are seeking an injunction to prevent Steve Madden from continuing its sale of the BTotally bag – while also making a claim for unspecified damages. 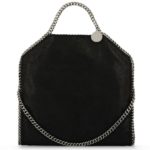 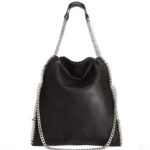