Battle of the unicorns

Coffee giant Starbucks is being sued by a New York City cafe over its ‘Unicorn Frappuccino’.

Let us introduce you to ‘David’, a cafe in Brooklyn called ‘The End’, who is suing ‘Goliath’, worldwide coffee chain Starbucks. It all centers around… a unicorn.

The End has accused Starbucks of trademark infringement, arguing that the color-changing “Unicorn Frappuccino” recently introduced by the coffee giant is copying The End’s health-conscious “Unicorn Latte.”

The End started selling the Unicorn Latte in December 2016, and has a pending trademark application for the drink’s name.

Last April, Starbucks launched the ‘Unicorn Frappuccino’, a limited item. Because of the vivid colours, the drink quickly gained considerable media and consumer attention; it’s a big hit on Instagram.

Neither of the drinks contain coffee, but they are on opposite ends of the healthy consumption spectrum. The End says its Unicorn Latte is made from ingredients like dates, ginger root, cashews, blended with ‘healthy’ dried maca root, vanilla bean, and blue-green algae, while – according to The End – Starbucks’ drink is made from milk and artificial sweeteners.

Starbucks stated the claims “are without merit.” 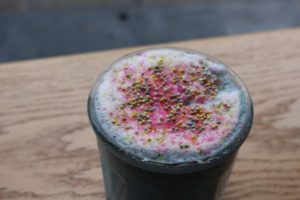 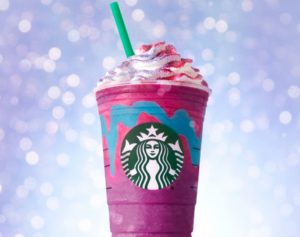