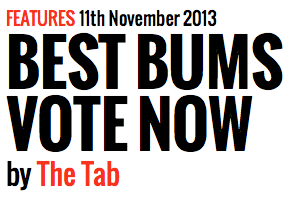 Cambridge University’s online magazine “The Tab” has been forced to rename its “Rear of the Year” competition after a trademark infringement.

The online student magazine has been running a competition in which readers are asked to to pick which bottom out of 10 contestants deserves the title of “Rear of the Year”.

However, apparently, the idea is not new. At least, the name isn’t. A national, trademarked “Rear of the Year” competition, which has been running since 1976, has demanded that The Tab change the name of its competition.

Tony Edwards, the organiser of the official Rear of the Year awards, said that “the publishers of the student website had been instructed to delete all reference to the protected title and had unreservedly agreed to comply.”

To avoid being sued, The Tab changed the name of its competition to “Best Bums”. MarkMatters.com has a feeling someone else might also have come up with this name. If it does, well, bummer.