This month FC Barcelona have officially announced the new jersey for the 2019/20 season. The design of the shirt is a revolutionary one as Barca moved away from the classic striped Blaugrana jersey (for which they even have a trademark registration), opting for a checkered pattern.

It is the first time when there are neither horizontal nor vertical stripes on the FCB’s kit. Since the announcement, fans have already noticed some clear similarities with the Croatia national team shirt.

The Croatian national team noticed it too: “Nice try, Barcelona” they responded on social media. “But you can’t beat red-and-white checkers.”

The Spanish football club responded: “Well, we are convinced that Ivan Rakitic will surely enjoy the new Barcelona kit”, referring to the midfielder who plays for both Barcelona and Croatia. 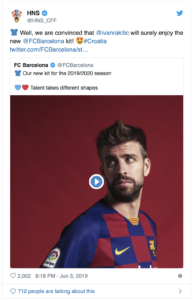