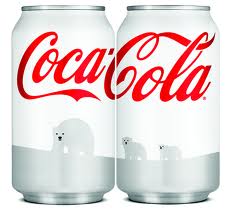 At first it was a nice idea of Coca-Cola to support WNF in their fight to preserve the polar bear. In the US Coca-Cola turned their red cans into white with polar bears on it.

Often competitors create confusion in the market, this time it’s Coca-Cola itself that confused the coke-drinking Americans. Many Americans believed that the white cans were diet coke. Others found it just sacrilege. Coca-Cola has stopped the campaign, the cans are now red again. A nice example of how colors function!