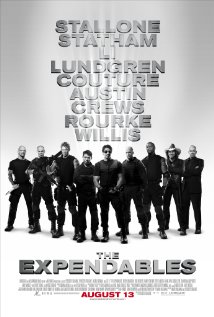 A team of mercenaries is given the assignment to take out a corrupt military leader and a rogue CIA operative on a Latin American island. Sounds like a great movie, right? Well, it sounds like a movie, period. But it’s a movie with Sylvester Stallone! Yes! A movies with Sylvester “Rocky/Rambo” Stallone. How about that!

The movie is called The Expandables and has been charged in connection with plagiarism.

Stallone was indicted by movie writer Mark Webb. According to Webb the script of the Expandables is almost identical to his own screenplay titled “The Paper Cordoba” (sounds a bit better than “The Expandables”, right?). Webb wrote his script in 2006. Sly’s movie is made in 2010.

Neither Michelle Bega, Stallone’s spokeswoman, nor producers Millennium FIlms and Lions Gate have any comment.

To be continued (there is is also a sequel, conveniently titled “The Expandable 2”)….