Elon Musk, Tesla’s CEO and founder, is being accused of infringing on copyright, but he is happy to admit this is the case.

Promotional materials for Tesla used images of a unicorn farting into a pipe in order to power an electric car. The image was originally drawn by Colorado potter Tom Edwards. Tesla did not have permission to use this image.

It all began in February 2017 when Musk tweeted a picture of the mug originally designed by Edwards: ‘Rainbows, unicorns and electric cars’.

The case is remarkable, like Musk is: normally a defendant would try to argue that there are significant differences between the two works, and in any event that there was no copying. In this case though, Musk is being provocative by claiming it would be “lame” for the artist, Tom Edwards, to sue, and that apparently Mr. Edwards should be grateful for the attention. This is a surprising response to a request to settle the dispute amicably.

Meanwhile, the case has been settled. Tesla’s top boss announced that he had cleared the air with Edwards: “We have settled in a way I believe is pleasing to both parties”, which is marketing lingo for “We payed him a nice sum of money to refrain from suing us”. 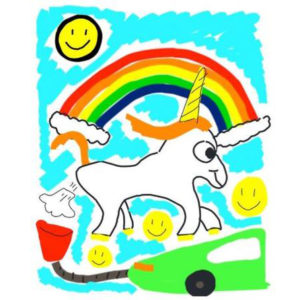 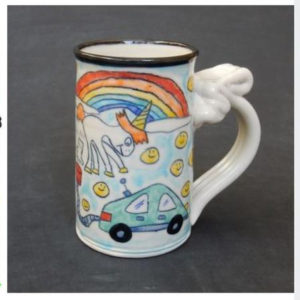