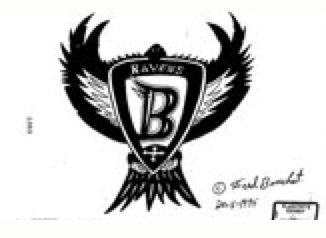 Ever since Frederick Bouchat, a stadium guard and amateur artist from South Baltimore, sketched a flying raven clutching a shield with a “B” and sent it to the Maryland Stadium Authority 16 years ago, he has won a court case crediting him with creating the Baltimore Ravens’ first logo. But credit is no compensation.

Recently, Bouchat ran into a new dispute, cchallenging the National Football League’s use of the old logo, that has resurfaced on television, on the Internet and in popular video games.

Basically, the case revolves around the novelty question. — whether the design has become a piece of history and therefore can be used freely. The Ravens and NFL deny they are profiting from using the logo.

“He was an individual who was forgotten and shunned in the rush to market the team,” Bouchat’s attorney said. “He’s never gotten the appropriate credit, either personally or commercially. He’s created something that was of value in an intellectual property sense.”

The Ravens declined to discuss the cases.

What is it with sports teams and IP (see earlier posts here, here and here)?