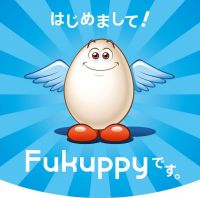 Linguistic checks. Can’t live without them. Sometimes your carefully branded name has a meaning in other countries or languages your didn’t even know about.

Fukushima Industries said Tuesday it was rethinking its “Fukuppy” mascot, after negative news about it went viral on the Internet.

Fukushima is an Osaka-based refrigerator maker, whose name derives from its founder. Unfortunately, the name is the same as the leaking Japanese nuclear plant.

Their newly introduced mascot is named “Fukuppy”, which is well… quite an unfortunate name in the English language, as you can imagine. Fukushima stated that the name is a blend of the first part of the company name (Fuku) and the end of the English word “happy”, saying it represented the corporate philosophy of being a happiness-creating company.

After realizing their mistake, Fukishima apologized: “We sincerely apologize for worrying many people and creating misunderstanding among them. We will look into the name, including a rethink of it.”

Maybe when rebranding “Fukuppy” they can also rethink the (radioactive?) beams that are emited from the happy egghead. Just a thought…