Super Mario Bros. is Nintendo’s best selling console game. With over 200 millions copies sold since the early eighties, the adventures of Mario and Luigi, the plumbing brothers, remain as popular as they have been for years

The latest Mario Bros. adventure is called Super Mario 3D Land. During the game Mario can change into “Tanooki Mario”: Mario (or Luigi) then wears a raccoon-like suit, that gives him extraordinary powers. It is this wearing of the tanooki suit, that has upset animal rights group PETA.

It seems that PETA is not happy about Mario “wearing fur” in the game. The fact that it is ‘virtual fur’ does not make it less harmful, according to PETA.

PETA even created an online ‘parody’ game, that shows a skinned raccoon that attempts to get his fur coat back. Most gaming sites consider the ‘parody’ as tasteless and misguided. Earlier PETA has also targeted children with comic books such as ‘Your Mummy Kills Animals’, showing a meat-eating mother covered in blood.

On their website PETA states: “Tanooki may be just a ‘suit’ in Mario games, but in real life, tanuki are raccoon dogs who are skinned alive for their fur.”

     PETA is doing great and praiseworthy things in their fight against animal cruelty, but this may just be a bridge to far. It is not as if Mario is skinning the raccoon dogs himself, he just becomes one (a raccoon) sometimes in his mission to save the princess. That’s noble! What PETA is doing now, is not. 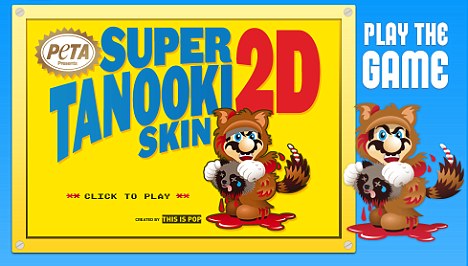