How does it feel?

You probably know Bob Dylan for his music (or from your father’s record collection). Some of his early songs such as “Blowin’ in the Wind” and “The Times They Are a-Changin'” became anthems for the US civil rights and anti-war movements.

He even has an exhibition. A selection of his paintings are shown at the Gagosian Gallery on the Upper East Side in Manhattan, New York. But these paintings are under a lot of debate.

Dylan’s exhibition, “The Asia Series,” is “a visual journal” of Mr. Dylan’s travels “in Japan, China, Vietnam and Korea,” with “firsthand depictions of people, street scenes, architecture and landscape.” Or so says the exhibition’s catalogue.

But… is it really that firsthand?

Questions have been raised about whether some of these paintings are really based Dylan’s own experiences and observations, or on photographs that are widely available and that he did not take. 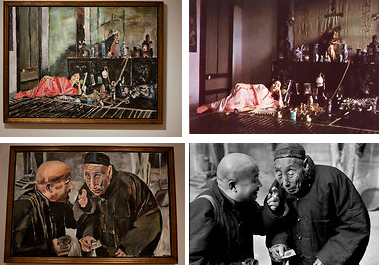 One painting of two men and a Henri Cartier-Bresson photograph of two men are awfully similar.

Although all artists are inspired by other artists, this seems a bit too inspired.

In an interview in the gallery’s exhibition catalogue, Dylan states: “I paint mostly from real life. It has to start with that. Real people, real street scenes, behind the curtain scenes, live models, paintings, photographs, staged setups, architecture, grids, graphic design. Whatever it takes to make it work. What I’m trying to bring out in complex scenes, landscapes, or personality clashes, I do it in a lot of different ways. I have the cause and effect in mind from the beginning to the end. But it has to start with something tangible.”

Did Dylan copy? It seems very likely. He hasn’t admitted it though. So, we guess the answer is blowing in the wind.