It’s not only fine feathers that make fine birds (2)

Last week we mentioned that Twitter has a restyled logo. Along with the logo-change, Twitter has also published a guideline how to use, and more importantly, how NOT to use their logo.

Along with the (funny and creative) Violate Twitter Brand Guidelines-webite, there are more reactions.

Cartoonist Adam Koford (@ApeLad) has transformed the old ‘Larry’ in his own character interpretation of Twitter’s iconic logo. His series called ‘Twitter Avatars’ features characters from various cartoons, movies and television programs designed in the shape of Larry’s old avatar. 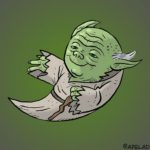