Jeep. There is only one 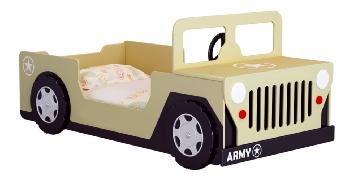 The most famous model of the car manufacturer Jeep is specially designed for the U.S. Army during World War II. The most characteristic thing of this Jeep (and later Jeeps) is the form of lamps and grille.

Chrysler, the current owner of Jeep, has registered these characteristics as a trademark in the European Union for toys: 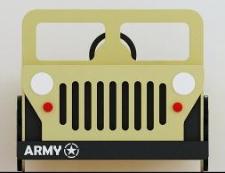 Recently, the above illustrated infant bed has been registered as an European design. The bed is made in the shape of a car and is very similar to a Jeep.

An interesting question is whether Chrysler can act against this design on the base of their trademark. A first question would be whether the trademark of Chrysler is a valid and distinctive trademark, in other words, will the relevant public recognize cars by the means of these lamps and grille? This will be a first hurdle for Chrysler.

The next question is whether the design and trademark are similar to such an extent that a likelihood of confusion among the public of children’s stuff arises. MarkMatters.com thinks that a link might be established but real confusion is a bridge too far. At the end, a Jeep is for some grown ups a toy but Jeep is not a manufacturer of toys.