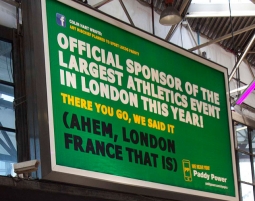 This post is about Paddy Power. This name did ring a bell with MarkMatters.com, but from what? Paddy Power is a betting agency. Yes, Paddy Power, that is the company behind the Danish boxer short incident on the European Championships football! This resulted in a huge fine.

It seems that Paddy Power has his own sport as it tried to get in the news with a new ambush advertisement with the tagline “Official sponsor of the largest athletics event in London this year!” In fact, the company is sponsoring an “egg and spoon” race in the town of London, in France.

The organizing committee was not amused and had the billboard removed,. But Paddy Power is fighting back and starts a lawsuit against the organizing committee. Interesting, because this law suit could clarify whether or not a ban on for example the word London 2012 (rather general terms) will hold.