American presidential campaigns are always a bit of a soap. Sometimes candidates make a fool of themselves. And sometimes even trademark infringement is involved. The most recent case: Donald Trump’s red hat.

Trump wears a hat that says “Make America Great Again”. It’s s stupid hat, many say. The Washington Post even created a special page dedicated to making all kinds of hats that want to make all kinds of things great again. And then there is NYC’s mayor Bill de Blasio, who decided to make fun of Trump’s stupid hat by wearing his own stupid hat.

Now there is some discussion whether de Blasio’s “Make America Fair Again” hat is a trademark violation, because Donald Trump has registered his “Make America Great Again” slogan.

So, is this a trademark violation? Bill de Blasio will probably just say: “Parody!”, as parody is protected under Fair Use.

Anyway… Trump’s red hat is a parody by itself. 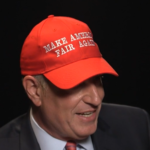 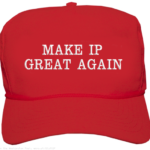