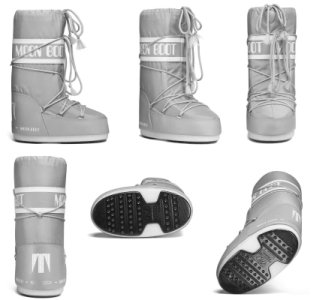 Under the logo of Moon Boot the tag line “The Original” is written. In the event a holder of a trademark has to put these words under his mark he knows that he has created a very successful product that is being copied everywhere.

Moon Boot is a remarkable shoe whose name is interwoven with the look, everybody is talking about moonboots. This is difficult for the holder of the trademarks as he has to keep freeriders on a distance but he has also to act against everybody who uses its name in a generic manner.

Recently the owner of Moon Boot filed a 3D trademark in the European Union (left). Apparently, he wants to protect the look of the shoe as a trademark as well. Although this 3D mark will be accepted as a trademark it is unsure whether the 3D form has been protected. The reason why this 3D trademark is accepted is mainly because Moon Boot is written on the shoe. Nevertheless, the shape of the Moon Boot is quite recognizable, in the opinion of MarkMatters.com a valid 3D trademark. So why filing this mark with Moon Boot on it?