It should have been the festive launch of a new pair of Nike Air sneakers, but the controversial design of the Air Max 1 USA threw a spanner in the works. It’s the second time in a short period that the sportswear manufacturer got into trouble by linking its brand to a political statement.

The Air Max 1 USA was presented as an ode to American independence. But then came Colin Kaepernick. The former American football player gained a worldwide reputation after kneeling in 2016 while playing the American anthem, as a protest against police violence and racial discrimination.

Kaepernick stated that Nike failed at the design of the sneakers. The heel of the shoe featured the ‘Betsy Ross Flag; a forerunner of the current American flag. The design dates from the American Revolution and contains only thirteen stars, which stand for as many colonies at the time. According to the Wall Street Journal, Kaepernick drew Nike’s attention to the fact that the design refers to a time of slavery.

Nike apologized and took the sneakers off the market. Some lucky buyers, though, are now selling the highly limited pairs for as much as $25.000,-! 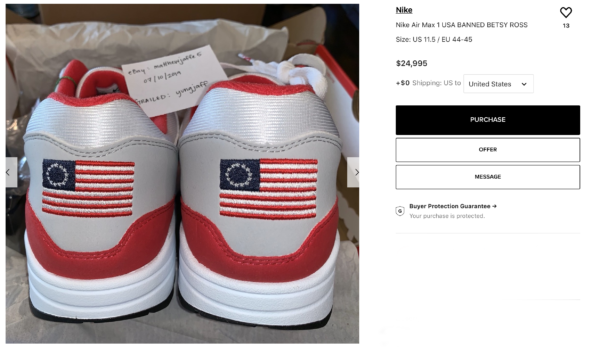