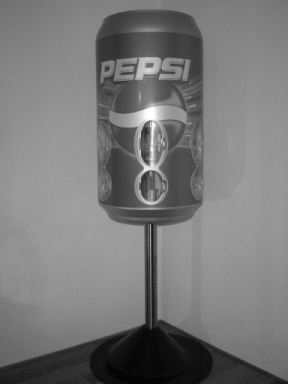 A remarkable design has been recently filed in the European Union: a dispenser of the Australian company Addco Nominees Pty. The dispenser itself is not particular but the fact that Pepsi is stated on the dispenser is.

The protection of this design right extends to the design elements of the dispenser. Besides the feet as well as the two “windows” the motif plays a role in this design.

The question is, now the Pepsi logo and the Pepsi can are not new in the terms of the European design law, whether this dispenser consists of a valid new design consisting of a own character. In the view of MarkMatters.com probably yes, as several elements give the dispense a different overall impression comparing to what already exists.

If this design is indeed a valid design, we believe that Addco, perhaps unintentionally, has acquired rights to the appearance of the Pepsi logo. We assume that Pepsi will not be very pleased with this (although probably this dispenser is made ​​for Pepsi).

Probably a call from Pepsi to Addco will be enough to solve this problem but in the event a legal battle is started Pepsi can (in MarkMatters’ view) successfully invoke its trademarks right against this design.