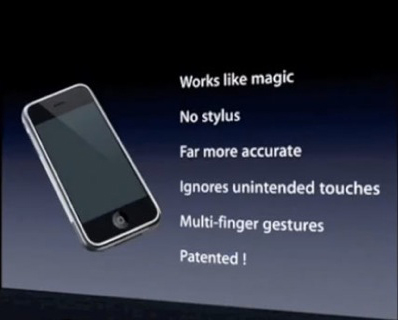 “Boy have we patented it!”, Steve Jobs said during the 2007 unveil of the iPhone, the smartphone that would take over the world. But it seems one of the patents has lost it’s validity because of Jobs’ legendary keynote.

In order to successfully file a patent, the invention has to be “new’. The technique cannot be revealed to the world prior to filing the patent. In that case the patent is not valid.

One specific patent also known as the “bounce back” patent – the cool little visual gimmick that you see when you’re iPhone reaches the end of a list and bounces back a little – was also filed some 5 months after Steve Jobs had given the presentation showing the iPhone off to the world. And that’s where the problem comes in. A German court has just ruled that this is obviously prior art: the technique was revealed to the world 5 months before the patent was filed and that’s just prior art. Thus the patent is not valid.

It’s interesting because Apple has sued competitors over using the ‘rubber banding’ effect. This may have consequences for the pending cases.