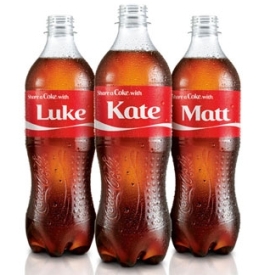 Coca-Cola Australia launched a viral campaign on their Facebookpage shareacoke.com.au where anybody can create his own can with his or her name on it. Of course, in the special Coca-Cola script.

As already discussed in our posts on Fluid Trademarks, the question raises, from both a legal as well as from a marketing or branding point of view, whether or not a changing mark is likely to cause dilution if it is the owner itself who is changing the mark. Or does it make a strong mark even stronger? In this respect, everybody borrows the famous Coca-Cola script and creates his own mark.

Probably this campaign will affect Coca-Cola, the most valuable and probably the most famous trademark in the world, only in a positive way. In other words, the mark is sufficient strong to keep itself away from the dilution hands. Still wondering whether somebody who is called Pepsi also can order a can.