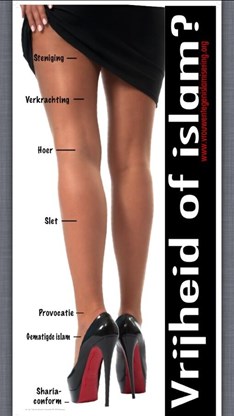 After yesterday’s post, today more Louboutin news. Now the ‘red-sole-maker’ is complaining against an anti-Islamic campaign. We are almost running out of shoe puns.

The French shoes manufacturer has officially protested against the campaign “Freedom or Islam?” of the Belgian association Women Against Islamization (VTI). Louboutin wants their campaign to stop, as it is damaging their brand image.

Women Against Islamization started a new campaign last week: a poster with a woman raising her already short skirt. Next to her legs are words like ‘sharia compliant’, ‘moderate islam’, ‘provocation’, ‘slut’, ‘whore’, ‘rape, and ‘stoning’. The woman in the ad is clearly wearing Louboutin pumps.

“A woman is considered inferior according to the Sharia. The symbol here is the obligation of certain attire”, said Anke Vandermeersch, Chairman of VTI. ‘Whore’ and ‘slut’ are words that we are called when we walk the streets of Antwerp. As a woman we revolt against it.”

Although legally Louboutin may have a case. In the Benelux it is possible to file a suit for trademark infringement, even if there are no commercial activities. However, it is our experience that in cases like these a brand owner must be careful. A suit like this may backfire.