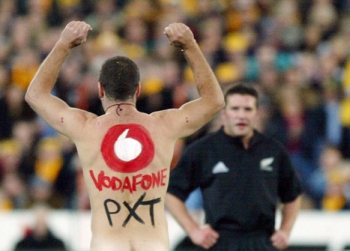 Anyone who has a tattoo of his or her favorite brand and wants to show this to the world during the Olympics next year in London should think twice. The Department of Culture, Media and Sport released severe rules to outlaw advertising on the human body.

Fines over the 20.000 pounds and even sentences to jail can be given to anybody, like this streaker during the Rugby tournament in New Zealand, who shows a brand on his body.

These rules are a clear warning against guerilla and ambush marketing. And all of this of course to protect the sponsors of the game!

A Department of Culture spokesman said the act would not apply to those streaking without logos. Well, every clever attorney directly sees a loophole!