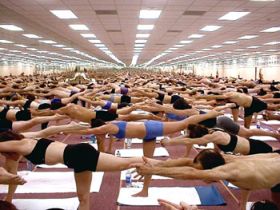 Bikram Yoga is a series of two sets of 26 postures and breathing exercises. These exercises are conducted in a very hot room (actually 40 degrees celcius, 105 degrees fahrenheit). Background idea is that by the means of this heat the muscles are more flexible and toxins are flushing out.

The founder of this yoga is Bikram Choudhury. He has copyrighted the technique. Whereas yoga turns people into relax creatures adopting a successful technique will surely do the opposite with Bikram himself as he has to defend his copyrights vigorously.

Bikram has now started a copyright case in California against an old student Gumucio. The latter has started yoga schools where hot yoga classes are given, and of course for less dollars.  According to the lawyer of  Bikram,  the classes of Gumucio showed “virtually mirror images and the dialogue was consistently the same”. Gumucio denied the claim and said that he never had agreed with Bikram and his idea “that he owned the yoga and that he should sue anyone”.

MarkMatters.com hopes for a lively day at the court with many demonstrations of the Yoga poses, of course, done by the lawyers.