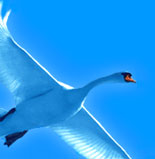 Today we have a classic for you. On the fringes of trademark law and passing off.

In 1995 KLM, the Royal Dutch Airline, launched a campaign with a swan with the slogan “Reliable. KLM”. A stately commercial for a stately airline.

The nineties were also the years of upcoming budget airlines, that tried to gain market share at the cost of the established airlines. Easyjet was one of them. The launched several commercials with a ‘KLM swan’. A swan that rather flies Easyjet.