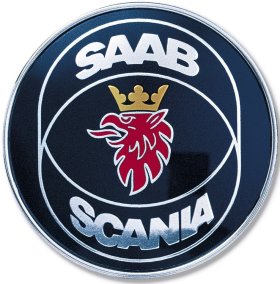 Saab (automobiles) and Scania (trucks and buses) were once part of the same group. They even share the same logo: a blue circle with a crowned red griffin

Now that Saab is likely to be sold and fall into Asian hands, Scania does not wish to share anymore.

They object to the fact that the logo will be used on other than Swedish cars. “We have been using this logo since 1911. We do not want our trademark to be used in a way that can harm our brand”, according to a Scania spokesman.

The red griffin’s head is derived from the coat of arms of the Swedish province of Skåne.

We assume that Scania wishes the brand to stay Swedish. Swedish cars have a reputation of being premium quality and very safe. However, the big other Swedish car brand Volvo is already no longer Swedish, after it was acquired by Chinese form Geely. It will up to the new owner to keep the brand identity alive.

As for the trademark. As long as the trademarks are not in the name of Scania, there will not be much they can do.