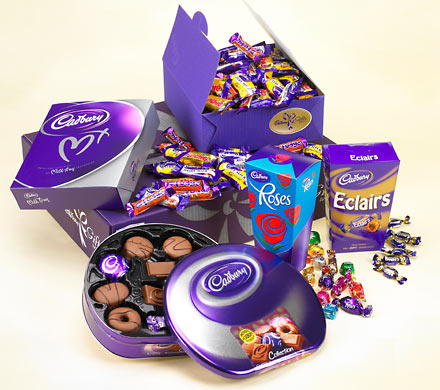 Cadbury is purple, and well known for it, as we wrote earlier. But now the English Court of Appeal has sided with competitor Nestlé in the on-going war of the color purple, between Cadbury and Nestlé.

Cadbury has attempted in 2004 to register a shade of purple as a trademark for chocolate-based products. The specific color purple (Pantone 2685C) was applied as a rectangular purple box, as this is simply a box on a form that has to be filled in.

The UK Intellectual Property Office initially refused the application, as they were of the opinion that it lacked distinctive character, a requirement for a trademark. Later they accepted the application, when Cadbury filed evidence of distinctiveness acquired through use dating back to 1914. In other words, over the years, through intensive use, the color purple has become a trademark for Cadbury’s products.

In 2008 competitor Nestlé objected against the application., claiming that the color was not a “sign” capable of “graphical representation”. Nestlé lost before the English High Court, but appealed to the English Court of Appeal. And they won.

The Court of Appeal overturned the decision of the Principal Hearing Officer and the High Court. The Court of Appeal held that use of the words “or being the predominant colour applied” (as Cadbury mentioned in the application) meant the mark lacked specificity of appearance and opened the door to a multitude of other forms as a result of its implied reference to other colours and visual forms which had not been described in the application. It therefore lacked the requirement of“graphical representation”. This lack of certainty would give Cadbury a competitive advantage and put Nestlé and others at a disadvantage.

Cadbury has now lost its 2004 trademark application. Of course it can refile, but this means their new application will have a date of protection that is much later, namely 2013 instead of 2004