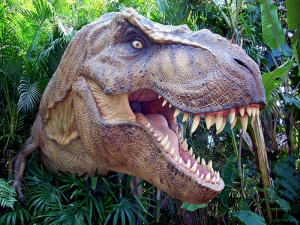 The first copyright case in man and dinosaur kind: a case dealing with copyrights of castings of a Tyrannosaurus rex (nickname T-rex).

It might be a public secret but only some of the bones of the dinosaurs and other prehistoric creatures in museums are real. Scientists find couple bones of these animals but never found a whole creature. The other bones are handmade. And these fake bones are the subject of a interesting legal battle.

The Black Hills Institute of Geological Research claims that Fort Peck Paleontology, Inc. made unauthorized copies of castings from their two T-rexes, with the names Stan and Sue. Fort Peck used these bones to to fill out incomplete portions of their T-rex known as Peck’s Rex. As Fort Peck profited from sales of replicas, Black Hills claims millions of dollars.

The concerning judge ordered the two parties to negotiate a settlement although the opinions differ. According to Black Hills their Stan has been copied while Fort Peck states that the matter only concerns a couple of bones, a minuscule percentage of the entire T-rex skelet.