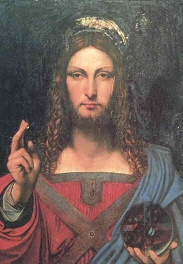 It is said that 75% of all artworks that Leonardo da Vinci has made have been lost. Thus, when a painting of the master is discovered this is great news.

This happened recently with the work Salvator Mundi that has been attributed to Da Vinci. This painting is now the subject of a lawsuit. Obviously not the copyrights on the painting itself, these are lapsed for almost 500 years, but a photograph of the painting.

This picture also appeared on several websites, including websites of the defendant. The Salvator Mundi LL filed a lawsuit in the U.S. claiming that their copyright has been infringed as the defendant has copied the photo and sold merchandise. The judge now has ordered a provisional prohibition of the reproduction and distribution by the defendant in anticipation of the final judgement.

The question is whether a photograph of a painting is protected by copyright, when this photograph is merely a simple reproduction of the painting. Museums like the Rijksmuseum and the Van Gogh Museum, who claim copyrights on their postcards with paintings of Rembrandt and Van Gogh will obviously give an affirmative answer but it remains an interesting discussion. MarkMatters.com is looking forward to the final decision in this case!