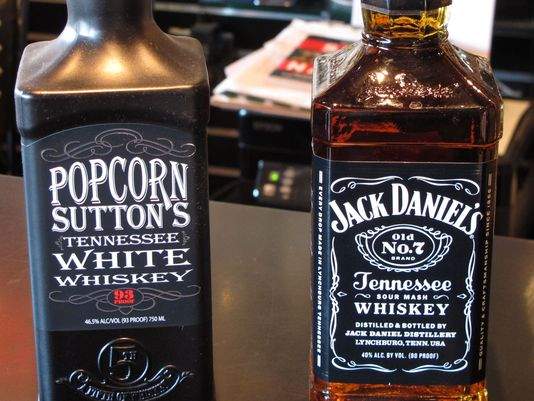 Jack Daniel’s has gotten quite the hangover over a white whiskey named for a famed Appalachian moonshiner.

It started out being sold in jars, but recently switched to square-shaped bottling. And this is what triggered Jack Daniel’s, the world famous whiskey brand, that sold 11 million cases of the Black Label Tennessee Whiskey last year.

Popcorn Sutton’s Tennessee White Whiskey, which is the name of the white whiskey, is now facing a lawsuit, since “JD” is of the opinion that the appearance of bottles is “confusingly similar”, and wants it removed from the market.

The suit notes what Jack Daniel’s believes are the similarities between the bottles: “both bottles are square shaped with angled shoulders and beveled corners, with white-on-black labeling color schemes. Even the font style of the Popcorn Sutton labeling is reminiscent of the Jack Daniel’s label”.

“Except for minor tweaks, the Jack Daniel’s packaging has been a consistent commercial impression for decades. That packaging is part of one of the oldest, longest-selling and most iconic consumer products in U.S. history.”, JD claims.

This could be an interesting case, as there are clearly also a lot of difference to spot, although we understand JD’s desire to keep their brand for diluting. Never dilute your whiskey. Drink it straight up. No ice.